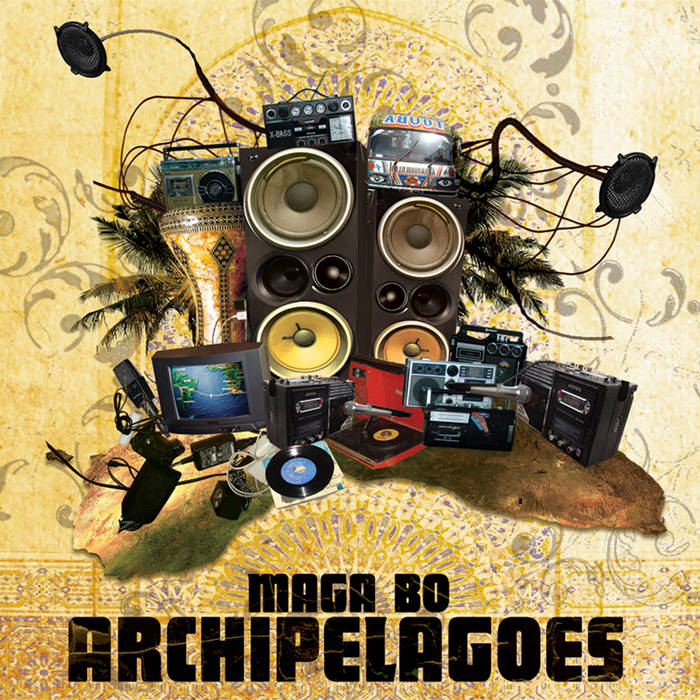 Robo Geisha Bass/Electronics, amazing percussion & string recordings, incredible vocal flows and voices, & motion motion motion! It's not a pile of canned samples and stoned-out badly mixed music. Everything about this screams talent, skill, and real appreciation for all the sounds in the mixing pot. I LOVE this music. Favorite track: Fire feat. Xuman.

A crunk cosmopolitan, Rio de Janeiro’s MAGA BO bumps more hot street-side beats than anybody we we’ve ever met. He’s played everywhere from Zanzibar to Sri Lanka to Capetown, trading ideas and sonics with musicians along the way.

After dropping the CD mixtape, Confusion of Tongues and 2 12" vinyl EPs on DJ /rupture's Soot Records, as well as tracks on WordSound, Nanny Tango/MELT 2000 and Tru-Thoughts, Maga Bo has completed his first full length record entitled ARCHIPELAGOES, to be released on Soot in April 2008.

When the freelance sound engineer works outside of his Brazil home-base, Maga Bo stays for weeks at a time: voicing dubplates, recording musicians, doing things like skills exchange and workshops (i.e. teaching young African hiphoppers how to rock pirated audio software...) Call it what you want – creating community, deconstructing the exotic, making collaborations in a fair and respectful way – the music speaks for itself.

MAGA BO's work as a producer, DJ, and musician has received international acclaim. He has worked and performed in over 40 countries including performances at WOMEX, Mundial and Transmediale. He counts among his collaborators the likes of Mulatu Astatke, Marcelo Yuka and Issa Bagayogo. His music and remixes have been released by Tru-Thoughts, Ninja Tune, Cumbancha, Soot and many others. ... more

Bandcamp Daily  your guide to the world of Bandcamp